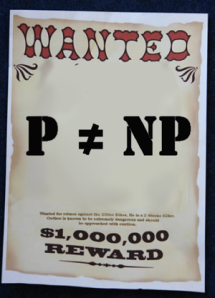 hi all.. quite a bit has happened since last blogged…

anyway, onward! heres more insider bkg info for you. started this blog because I had some nice new ideas about a P

debated carefully on how to title this and introduce it. could call it a “proof sketch” but many real papers use that phrase to refer to real proofs that exist in their heads or elsewhere but they dont want to write all the details. will fully admit/concede *the following does not have all the details fleshed out*. its a high level idea based on my best knowledge/ability & could possibly be worked into a proof someday.

to me proofs are very much like software and have a strong correspondence/resemblance. believe this connection will be highly stengthened in the years to come in the theory. software has an *architecture* and architecture has *blueprints*. this is certainly not a blueprint, but it is maybe something like a blueprint sketched on a napkin. or at least a sketch written in blue pen. whatever! note that this will be fairly technical in some places.

heres the overall perspective. P vs NP can be studied from circuit theory in the NP vs P/poly problem. now via theory one can use any NP complete problem, but my favorite is SAT, because SAT is itself a fundamental circuit theory problem. for years, wondered if there was some way to “diagonalize” circuits in the proof, and get some kind of proof by contradiction that if there are small circuits then eg some classes in the time hierarchy theorem would be computed faster than the speed limit allows. the diagonalization thought am sure has occurred to many other researchers. never did figure that out exactly so far…

so of course imagine that there are circuits for solving SAT. how big are they? it is easy to exhibit circuits that grow exponentially in size wrt input sizes. but so far virtually impossible to prove lower bounds on these circuits.

anyway, SAT is also nice because one can easily encode other NP complete problems in it & even those not known to be NP complete, but conjectured to be hard, eg factoring. an interesting exercise there which I did in my early 20s.

and one of the most basic NP complete problems to encode in SAT (aka CNF) is the monotone clique problem. consider a graph of

edges, each denoted by a binary variable say

vertices. each clique has

edges. the SAT formula has

clauses. each clause has

variables. and there is a set of these circuits, one for each graph size, call them

NP is a consequence of the stronger NP

can be expressed in size

but notice the symmetry of

. this is clearly a highly symmetric object. in fact a natural question in SAT studies is to look at the “clause graph” connectivity which is the graph where there is one vertex per SAT clause, and the vertices are connected if the clauses have any common variable. this is a deep topic and an entire Phd thesis could easily be written on the subject, and one has! [4]

and the clause graph of

is … an old familiar friend … a regular graph! exercise for the reader: how many edges does each vertex have? [6]

and heres another critical factoid:

now heres the twist that is not really seen in many complexity theory papers.

mono-SAT-hypergraph lemma: every *monotone* SAT formula is also a *hypergraph*. there is a simple 1-1 correspondence between clauses and edges, and variables and vertices.

this may not seem like a big deal but its importance should not be understimated. hypergraphs are an area of recent increasing study and that theory can be leveraged. moreover, the vast area of graph theory is slowly being reworked into new hypergraph analog theorems of important graph theorems. in other words, the hypergraph perspective of circuits may lead to important bridge theorems between two large but at times separately developed “continents” of theory.

in terms of hypergraphs and circuits simultaneously leads to the following picture. think first of

as a circuit. the question of the complexity of

comes down to asking if it can be expressed as smaller subcircuits with either a single AND or OR gate at the top (it can be assumed without much loss of generality that gates only have two inputs).

but believe it or not, and this is a fact rarely pointed out in complexity theory, in EE, electrical engineering, it is a key area of VLSI logic study to find smaller subcircuits for a given circuit. here it is referred to as a *factoring* algorithm. ie a larger circuit is *factored* into two smaller subcircuits. this problem has been studied in EE for decades, and it is known and understood to be very difficult with some CS reference to complexity theory.

in EE there are also software implementations that succeed on some smallish size circuits of say a few hundred gates, and these implementations are also almost always *approximate* algorithms. ie they find smaller circuits via factoring, but are not guaranteed to find the smallest such factors. for a near survey ref eg see [5].

if there are any factors at all. this can also be seen as a general *decomposition* algorithm. the algorithm needs to be *exact* ie it will always succeed if such factors exist. so the EE research is not directly relevant, it is more of a fruitful analogy/perspective. in EE the researchers gave up on exact algorithms almost from the beginning. however one can study the EE circuit factoring algorithms for some insights. now here is the punchline:

can be built out of smaller DAG circuits *iff* it can be factored!

hypergraph composition from circuit DAGs theorem: consider a monotone circuit represented as a DAG. that circuit be “fully multiplied out” to obtain a CNF or DNF at the top level. its sometimes called the “standard simplification rule” in EE textbooks. namely the distributive law of multiplication recursively, iteratively, inductively applied to the DAG in the form of a POSE or SOPE (product of sums expression or sum of products expression) .

if the inputs to the circuit are given as CNFs and DNFs, these can be modelled as “sub-” hypergraphs. and then the final expansion after all the multiplications can be seen as a hypergraph. the process of this monotone expansion involves two parts recursively applied:

this “cartesian bitwise join operator” is an apparently somewhat newly studied operator in complexity theory and also mathematics, cannot find much reference to it after several queries! [8,9] it may look unfamiliar, but… it has actually been hanging around and hiding in plain sight!

can be “decomposed” into a DAG it must be a combination of operations (1) and (2) above combined with what is known in SAT as “subsumption” of clauses. but it also appears to me:

subsumption conjecture: the subsumption operation in the above decomposition is not important to the circuits involved NP vs P/Poly problem being studied in particular

for the monotone clique problem.

form is not an important consideration and can be disregarded somehow (or as having “negligible” effect).

now, here is another key conjecture that significantly simplifies the problem:

big-factor conjecture: operation (1) may occur but it cannot lead to that many clauses in

. there must still be some “large” factors in

that are built up using operation (2). moreover since factors can be combined, it can be reduced to only two large factors that bitwise-joined together equal “many” clauses of

and here is also where there is some empirical evidence that comes into play. it is easy to write a program that creates two random hypergraphs

and multiplies them, and look at the results. this is obvious to state in retrospect, but unless

has a constant number of vertices

in every single edge!

in fact the cartesian bitwise join of two hypergraphs where the hypergraphs have disjoint vertices appears to have a strong resemblance to what are known as *multilinear formulas* [10] for which apparently there are some good lower bound results known (exponential).

so after all that a remaining wrinkle is the resemblance of

to a slice function which is not totally apparent. this is covered by a lemma:

“topless slice” lemma: a slice is composed of a “section” ORed with a “top” (a threshhold function) and therefore one can convert

without much increase in gates either way.

a slice can be written in the form (X

Z where Z is a threshhold function for hamming weight of 1 more than the slice “section”. a “section” X

Y is defined as a set of prime implicants (minterms) of exactly the same hamming weight.

note that in the definition of slices, it is not guaranteed that it has a top level

-gate instead of an

-gate. the case for the

-gate is slightly harder to prove, but think it can be shown without too much trouble under the assumption that P=NP (exercise for reader). and also there may be some dual properties to exploit here, although note its proven that converting

ok! that is the overall outline. obviously it all has to be fleshed out further. however, at this point it all seems intuitively plausible, eh? one of the important ways that monotone function theory is very valuable is the following. suppose that one is working with nonmonotone SAT formulas. it is a very difficult problem to determine if two SAT formulas are equivalent which apparently involves enumerating all their prime implicants/minterms, which can apparently also lead to exponential blowup. for details, see EE circuit minimization textbooks eg the Quine McCluskey method. but for monotone formulas, there is a unique representation. that is a valuable property that highly favors monotone circuits and is utilized directly in the above outline.

so, hey, cyberspace… any reaction(s)? wheres the big fat hole in all that? =)

11 thoughts on “outline for a NP vs P/poly proof based on monotone circuits, hypergraphs, factoring, and slice functions”