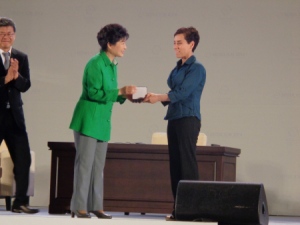 collected a bunch of links in a short amt of time.

there is some historical consternation about how Pulitzer did not have a category in mathematics. that debate can be found elsewhere.

the Fields medal is “worth” “only” less than $15K in USD (in somewhat striking contrast to the recent announcement of up to 5 yearly $3M Breakthrough prizes and the $1M Abel prize). in terms of prestige, priceless. (but of course mathematicians are the least to worry about “practical applications” of their work right?) ⭐ ⭐ ⭐

Gowers has a 1sthand account and is near-liveblogging the event. he has a lively/ colorful account including an adorable story about how Mirzakhani’s daughter was upset by costumes in the opening ceremony play. (semimiraculously, get quite a few hits from leaving comments/ links on his blogs.) it looks like all the lecture videos are available online.[a12]

the Fields medal is a bit rare also in how it has an age limit (40) as not! specified by its founder, but apparently the prize committee wanted to reward younger mathematicians, and emphasize fresh new breakthrough thinking, with major potential for future advances. 2-4 are awarded only every four years.[a]

a neat aspect of the medal also is that several recipients are very active, enthusiastic and committed bloggers. Gowers, Tao. anyone else?

Khot winner of the Nevanlinna prize came up with the Unique Games Conjecture as a graduate student, an astonishing accomplishment. but of course presumably (correct me if wrong!) the award is for much more subsequent work on it (post Phd).[b]

the Nevanlinna prize was won years ago (1990) by Razborov, one of my “favorite” mathematicians working frequently at the vigorous but very challenging boundaries/ frontiers of math/TCS. and related to one of my favorite proofs on monotone circuit complexity lower bounds. semimiraculously, can actually follow this simplified proof in college undergraduate textbook by Savage, Models of Computation. 😀

iranian winner Mirzakhani is the 1st female winner in the entire ~¾ century history of the prize, leading to huge MSM headlines even in a tabloid newspaper like DailyMail (with a clip about robin williams arguing about a Fields medal in his movie Good Will Hunting). this now even has international political implications/ reverberations with the Iranian president tweeting his congratulations.[c]

yes, mathematics can be a celebration of international unity and temporarily defy international political boundaries. (in this way it reminds me some of the LHC.) which reminds me somewhat of a quote by Hardy who was one of the great champions of pure mathematics, and had antiwar/ pacifist leanings (he was a friend of Bertrand Russell who was far more intense/ passionate/ vocal on the subject); quoting Hardy himself and following wikipedia commentary:

“Nothing I have ever done is of the slightest practical use.”

“I have never done anything ‘useful’. No discovery of mine has made, or is likely to make, directly or indirectly, for good or ill, the least difference to the amenity of the world.”

Some of Hardy’s examples seem unfortunate in retrospect. For example, he writes, “No one has yet discovered any warlike purpose to be served by the theory of numbers or relativity, and it seems unlikely that anyone will do so for many years.” Since then number theory was used to crack German enigma codes and much later, figure prominently in public-key cryptography.

the Simons institute is all over this event with high quality apparently pre-written articles and pre-recorded videos of the winners. Simons gave a keynote address at the opening ceremonies. would like to get a record of that talk, does anyone have it?

some additional CS angle! Hairer, one of the winners, is a world authority on stochastic differential equations and (ssssh dont tell anyone!) has a real empirical and even hacker side to him. 😮 🙂

A lover of rock music and computer programming, Hairer is the creator of an award-winning sound-editing program called Amadeus, a popular tool among deejays, music producers and gaming companies and a lucrative sideline for Hairer.

According to Li, it is Hairer’s diverse interests that inform his searing mathematical intuition, while his programming skills enable him to quickly test new ideas with algorithms.

For his 12th birthday, in 1987, Martin’s father bought him a pocket calculator that could execute simple, 26-variable programs. He was instantly hooked. The next year, he persuaded his younger brother and sister to go in with him on a joint birthday present: a Macintosh II. He quickly became a proficient programmer, creating visualizations of fractals like the Mandelbrot set and then, at age 14, developing a program for solving ordinary differential equations — the much simpler cousins of SPDEs.

(8/18) hey cyberspace thx for all the hits… (but you sure are quiet as usual…) fixed up the link sections to better organize them, now 3 sections instead of 2, some adj/corrections on the post, add new links, new “prizes/ awards” category etc.