hi all. Grothendieck showed up on my cyber radar more lately and it was an interesting coincidence/ synchronicity to have mentioned/ cited him in a se number theory chat room shortly before he died. now there is much great writing on him circulating, and have collected many highlights here. have been reading the excellent Notices of AMS for many years and found several excellent accounts/ writeups there.

alas, full disclosure, his math is far over my head (“whoosh”), but he was a mathematician’s mathematician, and said to be one of the most influential of the 20th century. so in ones appreciation for mathematics, one is sure to run across him.

(update: a vulnerable admission in excellent company. Gowers quickly responds! “I admire him greatly, but from a position of considerable ignorance…”)

Gowers introduced in his essay “the two cultures of mathematics” an idea/ dichotomy along the lines of Snowe’s “two cultures” (which has a lot of relevance to the geek concept), called Theory Builders versus Problem Solvers. in the latter category he mentions the towering Erdos by name (the gowers essay was written not long after the death of Erdos). and an earlier blog here mentioned Erdos, and the circle is somewhat complete with some small tribute to Grothendieck.

Gowers did not mention Grothendieck by name in that essay in the Theory Builder section (a rather striking omission), but Grothendieck surely epitomizes it. creating large sweeping theories not exactly interested in solving problems so much as classifying them. but along the way, contributing to problem solving.

for example it is said by some that Wiles FLT proof could not have been written without Grothendieck theory.

it is clear the two aspects/ styles exist in a Yin Yang synergistic feedback balance. one could not exist without the other. the snake eating its tail. crosspollination. 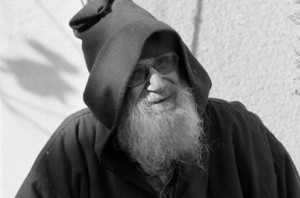 now, on to some other aspects of this, which mathematicians might downplay some, or maybe even “sweep under the rug” (& alas, even whitewash) in some cases. Grothendieck had an extraordinary life but in his later years, clearly, using as delicate a euphemism as possible to start, “went off the deep end”. he became a monklike hermit in a remote french village (in fact observed by one very audacious visitor to be a “Zen acolyte” with a Zen dojo in his sparse/ spartan residence!) and apparently even his family was not able to contact him. he worked on a large semibiographical book, unpublished, but which indicted prior close friends/ associates/ cohorts for (to put it lightly) bad behavior. the words “bright star” and “burned out” come to mind.

after a lot of study of psychology, my feeling is that he seemed to exhibit some symptoms of (untreated!) mental illness or character disorder. maybe not extreme forms. nobody has mentioned it so far, and its a bit daring to state this, but some of the stories seem to clearly attest to an identifiably narcissistic side. of course virtually all obituaries only allude to this and its considered taboo or bad form by many to armchair-diagnose stuff like this secondhand. but this blog rarely minces words. (oh yeah and it has long proudly featured a section/ sidebar/ compilation “mad scientist profiles” on all pages, and which Grothendieck was just added to, so there is perhaps some further qualification… and anyway doesnt he look like a Mathematical Merlin in the photo…?)

another account said that he stated he saw hallucinations. there can be no more clearcut sign than that…. one account mentions depression. and isnt any massive expose levelled against the establishment, and the idea of its having a widespread and gamechanging social impact, containing aspects of mania, grandiosity, or delusions of grandeur?

so this is a topic that has not been collected much, but Grothendieck is by far not the exception to mathematicians or scientists who seemed to go a little crazy esp near the end of their lives. some notable examples are Newton with his alchemy, Godel with some strange beliefs, and mathematician/ logician Post was at times committed to a mental hospital etcetera (and these are not well documented or known!).

the way which geniuses and their eccentricities are decoupled in scientific histories seems to relate to Kuhnian concepts. just as revolutions are written up in a characteristic way in science books, humans (with all their complexities and sometimes eccentricities) and their scientific accomplishments are often decoupled in historical accounts. this is a kind of social compartmentalization.

it also relates to a psychology concept known as splitting where people are seen as either heroes or “not”, and the “in-between” gets lost, here except at a social or collective level rather than the individual level (aka “mass consciousness” or “consensus reality”). its also known as the “shadow side” of humans and their culture (from Jungian psychology), and bright lights always create those shadows. as the japanese say “the reverse side has a reverse side.”

grothendieck also turned down the Fields medal and other lucrative prizes. now this is not really a sign of a mental disorder, but in our culture it is seen as strikingly odd, eccentric, and bizarre. but again it is not unheard of; Perelman recently (less than a decade ago) turned down a $1M Millenium prize for brilliant work. and of course the modern canonical example, immortalized in a very successful hollywood movie, is John Nash / Beautiful Mind and his “near-certifiable” schizophrenia.

at the moment it seems there is some tiptoeing around an elephant in the room, and nobody is talking much about Grothendiecks psychological symptoms (his utter isolation from everyone adds to that). it appears that a definitive biography hasnt been written yet, and any honest/ comprehensive/ complete account will have to confront all that. there is also a line of what might be called “retro-post-mortem diagnosis” scientific research on famous persons, eg van Gogh comes to mind. maybe some of that will be applied to Grothendieck and to me its a worthwhile historical and scientific exercise, if it isnt taken too far (the longer time passes and firm/ real details of life mix with legend, which has to some degree already happened somewhat with Grothendieck, the less accurate, successful, and more speculative the endeavor).

with some foreshadowing, now shifting gears to a topic of Cranks (with maybe some grinding!). this topic came up on a CS chatroom recently as a guy without academic background (er well technically he said he’s been to community college) just showed up with a ~30p paper analyzing the dynamics of Tetris and complaining about lack of peer reviews and getting the runaround. the response was mixed but actually coming out somewhat positive, even striking by some. strangely ironically, two graduate students skimmed it and gave immediate feedback and helpful advice, one student MW who won best student paper 2014 at ICALP (and nobody else had any comment on MWs groundbreaking paper so far… yeeks, bummer).

quite amazingly/ shockingly, the inescapable conclusion is that grothendieck, in the top mathematicans of the 20th century, basically turned into something very close to a Crank in the end of his life. he was not even working on mathematics any more. (obviously that alone is not any symptom whatsoever, but it does attest to the radical shift in his personality, after decades of intense/ extreme practice at the very pinnacle of the pantheon.) his long bitter semibiographical treatise has a lot of classic Crank aspects to it. he was also said to be working on some written analysis of the Devil.

so the stereotypical line between genius and “crank”, madness in worst case, can be quite thin at times, this is well known, has been known for ages, and even supported by more recent scientific neurobiological research.

wikipedia defines a crank as

“Crank” is a pejorative term used for a person who holds an unshakable belief that most of his or her contemporaries consider to be false.[1] A crank belief is so wildly at variance with those commonly held as to be ludicrous. Cranks characteristically dismiss all evidence or arguments which contradict their own unconventional beliefs, making rational debate a futile task, and rendering them impervious to facts, evidence, and rational inference.

so intrinsically, crankery hinges on *belief* and *refutation*. but this is quite interesting, when pondered, and can be subtle, even verging on paradoxical. which of the following is a crank?

wrt (c), as fact not widely known, at times up to 80% of americans believed it. and while the Warren commission report concluded (c) is a “conspiracy theory”, a later investigation/ report by Congress concluded that the Warren report was wrong on this key finding based eg on ballistic and forensic evidence etc.

as for the wikipedia definition, it is actually somewhat narrow wrt offhand use of the term. a scientific amateur without professional credentials (eg not educated or working at a university etc) who shows up with some half-baked paper does not necessarily/ strictly constitute a crank— and yeah, admittedly, there are a lot of cases of that on the internet and have dealt directly with a few on occasion myself… it can be a very timeconsuming process in some cases…. maybe most strikingly to me, some that come close to this personal diagnosis that have been encountered in my own travails have PHDs!

this is reminiscent of the way that words like “narcissism” and “borderline” have clinical psychological definitions that are not exactly the same as the casual, offhand popular uses of the word. the former have precise scientific aspects, list of symptoms, etc. and there is much occurrence of misconception and misinformation eg in pop culture.

the key is, is the paper making an impossible claim? and if so, how does the person actually respond to refutations of that impossible claim? but then we are into the dynamics of proof and refutation — and truth, and conventional wisdom, which can be very slippery things (or at least a blurry Venn diagram). how sure are we of the refutation? what science is the refutation based on? oh and then theres an old saying “lies travel all over the world before the truth even gets out of bed,” etc.

in my ~2½ decade study on P vs NP the topic of cranks is always looming close in the background (and on occasion have been insinuated as one myself). XD and before that, FLT was an area of research for me — a problem which may have one of the greatest “crank magnets” of all time! its a complex topic. and the casual/ flippant throwing around the word “crank” as an epithet will continue. but heres a small )( contribution to understanding the topic better in a more precise, sober and less facetious way. as the Grothendieck case (and others) reveal, the boundary between crankery and real mental illness is not a very strong one and thats not really a laughing matter.

a. grothendieck
b. obituary
c. “crankery/crankology”