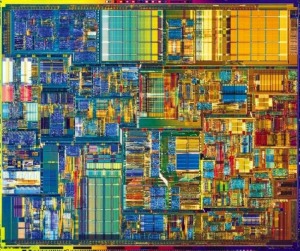 hi all intel recently merged with Altera who are top makers of reconfigurable FPGAs. it has taken years for FPGAs to be integrated into big systems but we are starting to see better understanding of where they apply strengths. the idea is that custom algorithms can be implemented in the FPGAs at less cost/ power consumption and possibly higher efficiency. google/ microsoft seem to be pursuing initiatives in the area. microsoft has figured out how to couple Bing processing with them (faster! cheaper!).[d13] for a time Bitcoin mining was done on FGPAs but that has given way to custom ASICs. my prediction is that FPGA coding will continue to increase in use/ attn esp in “big data” type scenarios.

this gives me an excuse to unleash a batch of links that have been piling up in my bookmarks for years on CPU related topics but was waiting for a neat moment of timing. this is an exciting area but it has stabilized somewhat over the last few years due to moores law plateauing. this is not a widespread understanding, and big multibilliondollar companies that are built on it like Intel dont really want to exactly “announce” it. this flatlining is having major effects on the industry however. recently saw some analysis that the use of GPUs in deep learning may be up partly due to the plateauing of moores law. is there a scientific paper as important as Moores paper in announcing this plateauing? havent found one yet but please let me know if you do. also, moores paper this year celebrates its 50 year anniversary… really cant beat a paper with the word “cram” in the title![b15] it constitutes one of the most impressive engineering predictions/ observations/ phenomena in all of scientific history.

chip design has many great stories over time/ ages/ history. one of my recent favorites is the construction of the ps3 CPU saga which was a private undertaking mainly between sony/ IBM funded with tens of millions or even hundreds of millions of dollars and is documented in a book. another big story is the rise of low power chips used in mobile computing which caught Intel flatfooted and they scrambled/ are still scrambling to build up their capabilities in that area. the rise in mobile computing over less than a decade (iphone only released ~2007) is a massive stunning shift that has had major social ramifications and ties in with social networks eg facebook/ twitter, and other rising apps like Uber and Tinder which just announced it wants to go public.

we seem to be at one of the classic grovian “inflection points” between old and new technology. very small gates are on the drawing boards at development labs all over the world (even very exotic stuff involving carbon nanotubes) but nobody seems to have crossed into medium or mass production viability yet. quantum computer gates are on the horizon and it looks like its going to cross into useable, but it will still take many years.

another major trend is multicore chips which has natural interconnections with the continued rise of supercomputing. chip cores havent increased much as some predictions from years ago made, but they do seem to be increasing steadily in some designs.

and a few days ago dwave just announced a 1Kqbit chip! lets see what happens with that. google/ nasa/ lockheed are likely to bang on it soon leading to a whole new cycle of news on it. cant wait!

(postscript bookmarks saga)… managed to synch my bookmarks by running laptop at home through wifi (shew), it turns out to be a proxy/ firewall problem, google bookmarks seem to need port 443 for authentication. but https works fine through my firewall. is https not using port 443? maybe it can run over port 80? but google https authentication apparently cant run over port 80? another one of those frustrating mysteries of tech. bookmarks synching still seems like a near-toy feature to me at times.

oh, and my bookmark toolbar is always messing up in chrome synch. duplicate bookmarks, mysteriously vanished bookmarks. as elsewhere in my bookmark list.

hey what can I say, am a bookmark “hoarder”. now up to a crazy 5K bookmarks. just unloaded a few dozen into this post. only another few hundred dozen left! at least am relieved didnt have to write my own html-based bookmark merge algorithm. but did write some code to find duplicate links in my bookmarks, and its a few dozen that could take hours to fix by hand. ouch!